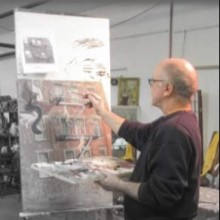 For 30 + years Kurt has been working and exhibiting in Toronto galleries. His ventures abroad have included 3 exhibits in New York City and one In Beijing. His work defies style; “it is a trap of limitations…”, much to the chagrin of some gallerists. His latest series of works deals with the lines and spaces created by subway systems around the world without geographic reference. Samples of it can be seen on his blog; see below. As well as on his WordPress and Tumblr sites
http://www.kurtscanadianart.com
http://www.myartword.blogspot.ca/
He has also recently published a book called Artcore. It is a combination of his paintings and poems he has written about them, and is available on amazon.com