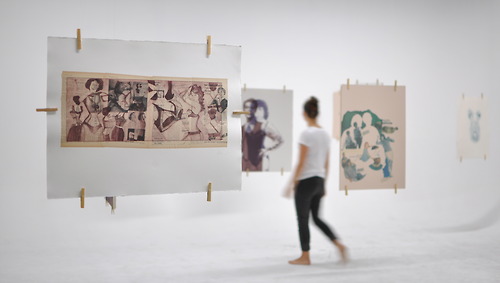 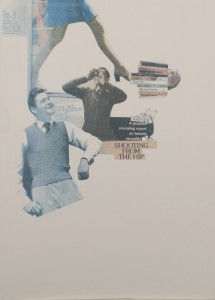 Mel Coleman is a BAH graduate from the University of Guelph with a Major in Studio Art and a Minor in Art History. Her practice includes the use of collage, painting and printing that results in a balance between generation and destruction. While condemning the excess of society’s material consumption, she reveals the inescapable absurdity of our nature since the 1950’s. Her work comments on the perversions and vanity with themes commonly surrounding gender, sex, consumerism, disposability and public media in our current time and prior.

Her artworks investigate the conflict of consumerism and identity within western society. These issues bring to light expectations of gender, materialism, and constructed identities. Her process navigates the space between collage and print through the assemblage of different source material found in old catalogues from the 1950s and 1960s and transforming them into a four-colour separation silk screens. The originally discarded and found material is re-appropriated to reflect and condemn America’s materialistic structures while focusing on the absurdity and inescapability of human nature with a feeling of mischief and cynicism. 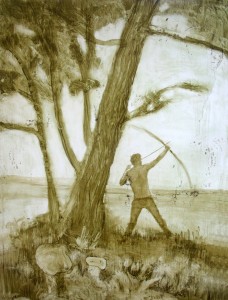 Patrick DeCoste is an award-winning Toronto-based visual artist who studied fine arts at Mount Allison University and is a candidate for M.F.A. at O.C.A.D. He has exhibited extensively in Toronto, as well as New York City and beyond. The Globe and Mail calls him ‘a young old master’. He was awarded a Chalmers Arts Fellowship in 2011. His studio is a cabin on Georgian Bay.

“I am inspired by my Nova Scotia Métis roots and informed by the history of first contacts between First Nations and Europeans. Through figurative painting, I create historical imaginary works coloured by this period of colonial conquest in eastern Canada. Champlain, the French explorer, and Kluskap, the Mi’kmaq folk hero are two of the many characters who inhabit the landscapes of my paintings. I use self-portraiture as a means to flesh out these characters and to insert my presence into these narratives.”